The human mind is limited.

We can only process so much information at one time. Numerals are text which communicate quantity. However, unlike other text, it’s a lot harder to read a whole bunch of numbers and get a high-level understanding of what is being communicated. There are sentences of numbers and quantities (these are called equations, but not everyone is as literate in them) however simply looking at a pile of data and having an understanding of the ‘big picture’ is not something most people can do. This is especially true as the amount of information becomes larger than a table with a few categories and values.

If you’re a market research, business, data, financial, or (insert other prefix here) analyst, part of your job is taking a lot of information and making sense of that information, so that other people don’t have to. Let’s face it – your Senior Manager or The VP doesn’t have time to wade through all the data – that’s why they hired you.

Ever since Descartes’ epiphany (and even before that) people have been realizing that there are other, more effective ways to communicate information than having to look at all the details. You can communicate the shape of the data without knowing exactly how many Twitter followers were gained each day. You can see what the data look like without having to know the exact dollar value for sales each and every day. You can feel what the data are like, and get an intuitive understanding of what’s going on, without having to look at all the raw information.

Like any practice, data visualization and the depicting quantitative relationships visually can be done poorly or can be done well. I’m sure you’ve seen examples of the former, whether it be in a presentation or other report, or perhaps floating around the Internet. And the latter, like so many good things, is not always so plentiful, nor appreciated. Here I present some finer points between data visualization choices, in the hope that you will always find yourself depicting data well.

Ah, the pie chart. The go-to the world over when most people seek to communicate data, and one both loved and loathed by many.
The pie chart should be used to compare quantities of different categories where the proportion of the whole is important, not the absolute values (though these can be added with labelling as well). It’s important that the number of categories being compared remain small – depending on the values, the readability of the chart decreases greatly as the number of categories increases. You can see this below. The second example is a case where an alternate representation should be considered, as the chart’s readability and usefulness is lower given the larger number of proportions being compared: 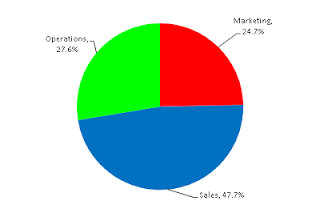 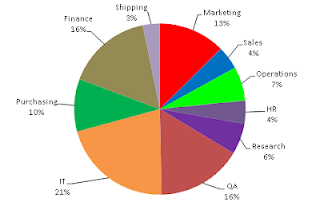 Doughnut charts are the same as pie charts but with a hole in the center. They may be used in the place of multiple pie charts by nesting the rings:

Though again, as the number of quantities being compared increases the readability and visual utility generally decreases and you are better served by a bar chart in these cases. Also there is the issue that the area of each annulus will be different for the same angle, depending upon which ring it is in.

With circular charts it is best to avoid legends as this causes the eye to flit back and forth between the different segments and the legend, however when abiding by this practice for doughnut charts labeling becomes a problem, as you can see above.

Tufte contends that a bar chart will always serve better than a pie chart (though some others disagree). The issue is that there is some debate about the way the human mind processes comparisons with angular representations versus those depicted linearly or by area. I tend to agree and find the chart below much better data visualization that the one we saw previously:
From a practical perspective – a pie chart is useful because of its simplicity and familiarity, and is a way to communicate proportion of quantities when the number of categories being compared is small.
Bonus question:
Q. When is it a good idea to use a 3-D pie chart?
A. Never. Only as an example of bad data visualization!

Bar charts are used to depict the values of a quantity or quantities across categories. For example, to depict sales by department, or per product type.
This type of chart can be (and is) used to depict values over time, however, said chunks of time should be discrete (e.g. quarters, years) and of a small number. When a comparison is to be done over time and the number of periods / data points is larger, it is better visualized using a line chart. 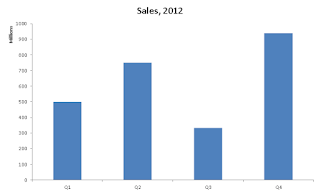 As the number of categories becomes large, an alternative to the usual arrangement (‘column’ chart) is to arrange the categories vertically and bars horizontally. Note this is best done only for categorical / nominal data as data with an implied order (ordinal, interval, or ratio type data) should be displayed left-to-right in increasing order to be consistent with reading left to right.
Bar charts may also be stacked in order to depict both the values between categories as well as the total across them. If the absolute values are not important, then stacked bar charts may be used in this way in the place of several pie charts, with all bars having a maximum height of 100%: 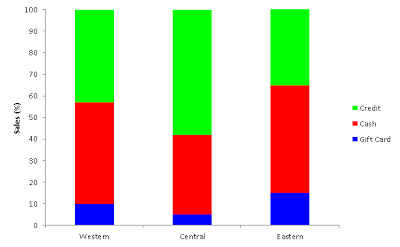 Stephen Few contends that this still makes it difficult to compare proportions, similar to the problem with pie charts, and has other suggestions [PDF], though I think it is fine on some occassions, depending the nature of the data being depicted.

When creating bar charts it is important to always start the y-axis from zero so as not to produce a misleading graph.

A column chart may also be combined with a line graph of the total per category in a type of combo chart known as Pareto chart.

Scatterplots are used to depict a relationship between two quantitative variables. The value pairs for the variables are plotted against each other, as below: 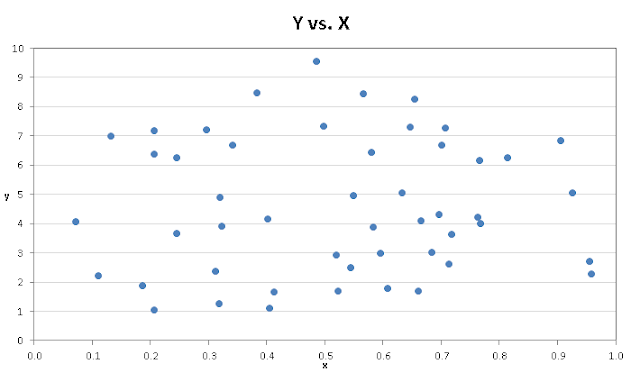 When used to depict relationships occurring over time, we instead use a special type of scatterplot known as a line graph (next section).

A bubble chart is a type of scatterplot used to compare relationships between three variables, where the points are sized by area according to a third value. Care should be taken to ensure that the points are sized correctly in this type of chart, so as not to incorrectly depict the relative proportion of quantities

Relationships between four variables may also be visualized by colouring each point according to the value of a fourth variable, though this may be a lot of information to depict all at once, depending upon the nature of the data. When animated to include a fifth variable (usually time) it is known as a motion chart, which is perhaps most famously demonstrated in Hans Rosling’s landmark TED Talk which has become somewhat of a legend.

For example, it makes sense to compare sales over time with a line graph, as time is numerical quantity that varies continuously: 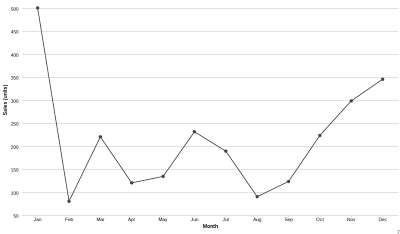 However it would not make sense to use a line graph to compare sales across departments as that is categorical / nominal. Note that there is one exception to this rule and that is the aforementioned Pareto chart.

Omitting the points on the line graph and using a smooth graph instead of line segments creates an impression of more data being plotted, and hence a greater continuity. Compare with the plot above the one below: 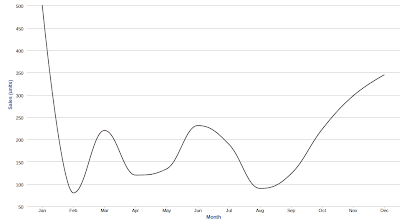 So practically speaking save the smooth line graphs for when you have a lot of data and the points would just be visual clutter, otherwise it’s best to overplot the points to be clear about what quantities are being communicated.

Also note that unlike a bar chart, it is acceptable to have a non-zero starting point for the y-axis of a line graph as the change in values is being depicted, not their absolute values.

This is just a sample of some of the finer differences between the choices for visualizing data. There are of course many more ways to depict data, and, I would argue, that possibilities for data visualization are only limited by the imagination of the visualizer. However when sticking with the tried, true and familiar, keep these points in mind to be great at what you do and get your point across quantitatively and visually.
Go, visualize the data, and be amazing!