Holy crap, it was cold out.

If you haven’t been reading the news, don’t live in the American Midwest or Canada, or do and didn’t go outside the last couple weeks (for which I don’t blame you) there was some mighty cold weather lately due to something called a polar vortex.

Meteorologists stated that a lot of people (those in younger generations) would never have experienced anything like this before – cold from the freezing temperatures and high winds the likes of which parts of the US and Canada haven’t seen for 40 years.

It was really cold. So cold that weird stuff happened, including the ground exploding here in Ontario due to frost quakes, or cryoseisms, as they are technically known (or as my sister suggested they should be called, “frosted quakes” – get it?)

When there is all this talk of a polar vortex, all I could think of was a particularly ridiculous TV-movie that came out lately, and that this is our Northern equivalent, which probably looked something like this artist’s depiction below:

But I digress. The real point is that all this cold weather got me thinking about windchill – what is it exactly? How is it determined? Let’s do some everyday analysis.

Wind chill hasn’t always been the same, and there is some controversy exactly how scientific it is in the way it is calculated.
Wind chill depends upon only two variables – air temperature and wind speed – and the formula was derived not from physical models of atmosphere but from participants in simulated laboratory conditions.
Also, the old formula was replaced in 2001 by a new formula, with Canada greatly leading the effort, since there was some concern that the old formula gave values too low and that people would think they can safely withstand colder temperatures than they actually could.
The old formula had strange units but I found this page at University of Carleton which provides it in degrees Fahrenheit, so we can compare the old and new systems directly.

Since the wind chill index is a function of two variables (a surface), we can calculate it using vectors in R and visually depict the results as an image (filled contour). This is in the following code below:
Which results in the following plots: 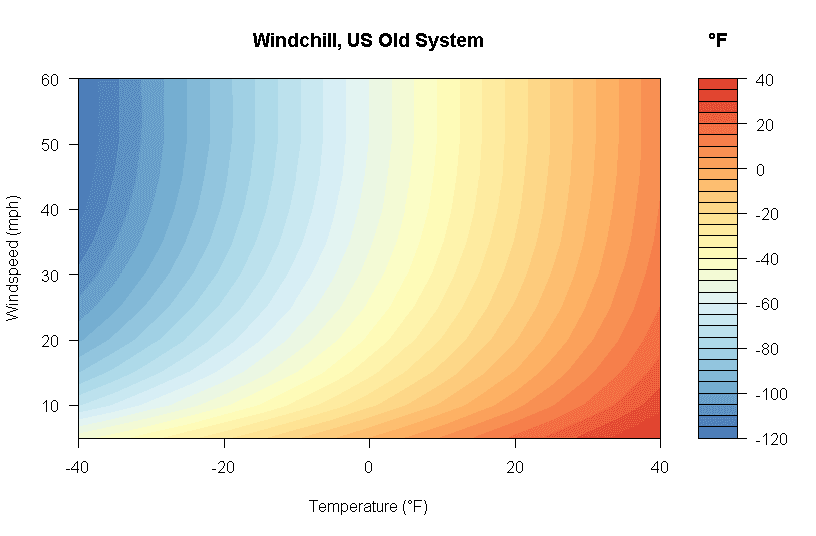 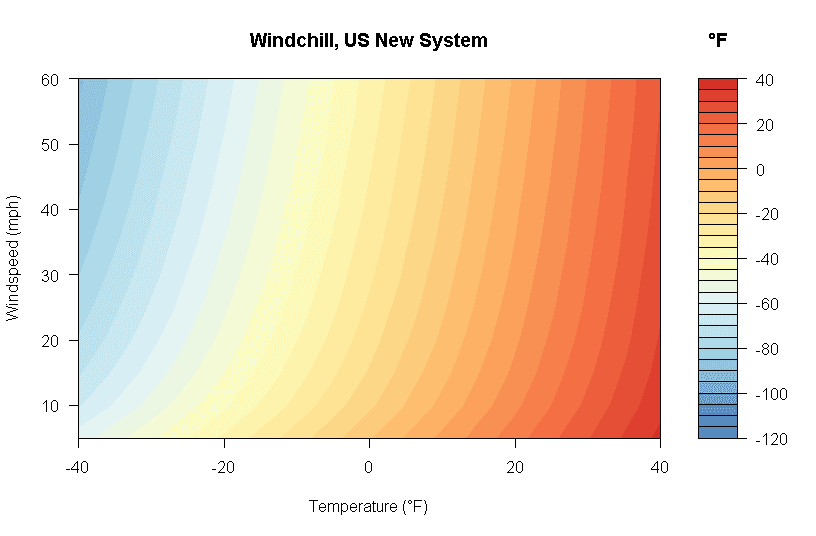 And the absolute difference between the two: 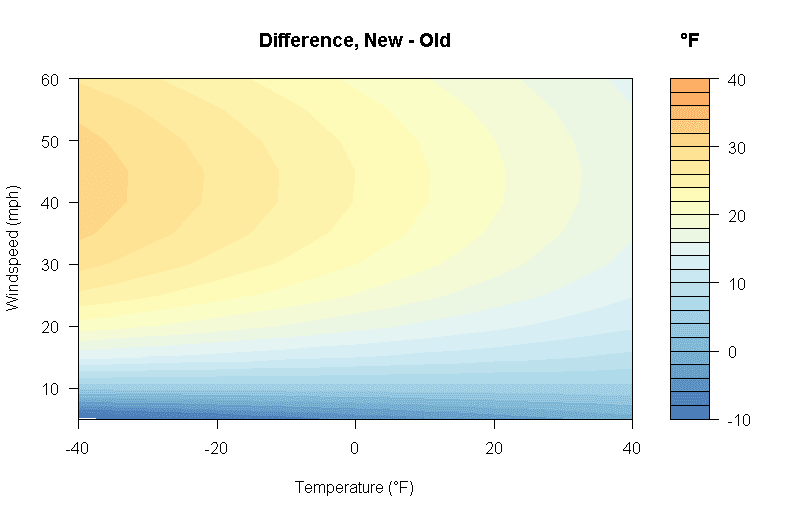 For low wind speeds (around 5 mph – wind chill is only defined when wind speed is greater 5 mph) you can see that the new system is colder, but for wind speeds greater than 10 mph the opposite is true, especially so in the bitter bitter cold (high winds and very cold temperatures). This is in line with the desire to correct the old system for giving values which were felt were too low.

If you’re really visual person, here is the last contour plot as a surface: 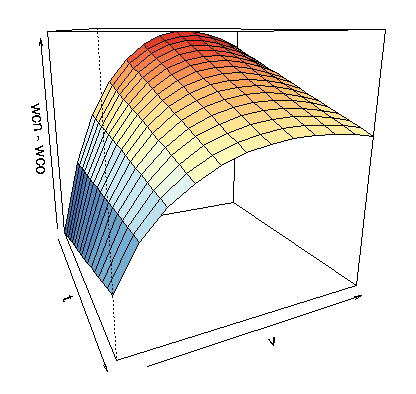 Which, despite some of the limitations of 3-D visualization, shows the non-linear nature of the two systems and the difference between them.

This was a pretty interesting exercise and shows again how mathematics permeates many of our everyday notions – even if we’re not necessarily aware of it being the case.
For me the takeaway here is that wind chill is not an exact metric based on the physical laws of the atmosphere, but instead a more subjective one based upon people’s reaction to cold and wind (an inanimate object cannot “feel” wind chill).
Despite the difficulty of the problem of trying to exactly quantify how much colder the blustery arctic winds make it feel outside, saying “-32F with the wind chill” will still always be better than saying “dude, it’s really really cold outside.”
Either way, be sure to wear a hat.

3 thoughts on “The Mathematics of Wind Chill”