I work in consulting. If you’re a consultant at a certain type of company, agency, organization, consultancy, whatever, this can sometimes mean travelling a lot.
Many business travelers ‘in the know’ have heard the old joke that if you want to stay at any type of hotel anywhere in the world and get a great rate, all you have to do is say that you work for IBM. 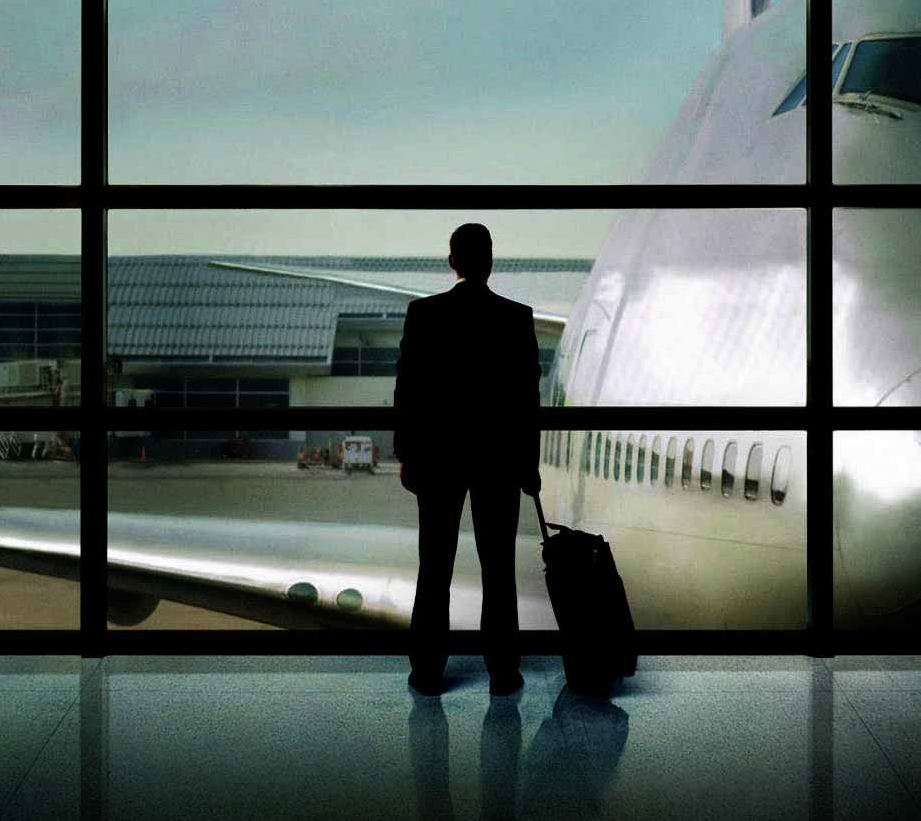 The point is that my line of business requires travel, and sometimes that is a lot of the time, like say almost all of last year. Inevitable comparisons to George Clooney’s character in Up in the Air were made (ironically I started to read that book, then left it on a plane in a seatback pocket), requests about favours involving duty free, and of course many observations and gently probing questions about frequent flier miles (FYI I’ve got more than most people, but a lot less than the entrepreneur I sat next to one time, who claimed to have close to 3 million).

The point is that, as I said, I spent quite a bit of time travelling for work last year. Apparently the story with frequent fliers miles is that it’s best just to pick one airline and stick with it – and this also worked out well as most companies, including my employer, have preferred airlines and so you often don’t have much of a choice in the matter.

In my case this means flying Delta.

So I happened to notice in one of my many visits to Delta’s website that they have data on all of their aircraft in a certain site section. I thought this would be an interesting data set on which to do some analysis, as it has both quantitative and qualitative information and is relatively complex. What can we say about the different aircraft in Delta’s fleet, coming at it with ‘fresh eyes’? Which planes are similar? Which are dissimilar? 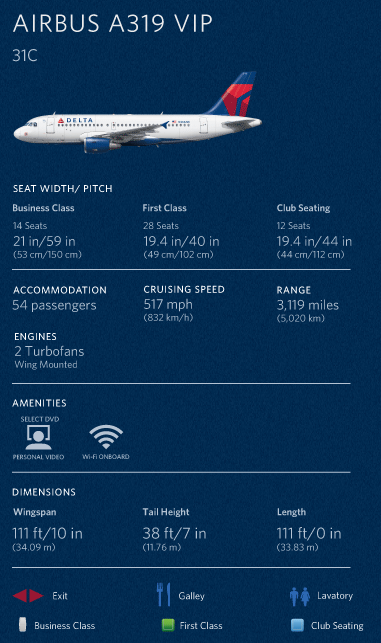 The data set comprises 33 variables on 44 aircraft taken from Delta.com, including both quantitative measures on attributes like cruising speed, accommodation and range in miles, as well as categorical data on, say, whether a particular aircraft has Wi-Fi or video. These binary categorical variables were transformed into quantitative variables by assigning them values of either 1 or 0, for yes or no respectively.

As this a data set of many variables (33) I thought this would be an interesting opportunity to practice using a dimensionality reduction method to make the information easier to visualize and analyze.
First let’s just look at the intermediary quantitative variables related to the aircraft physical characteristics: cruising speed, total accommodation, and other quantities like length and wingspan. These variables are about in the middle of the data frame, so we can visualize all of them at once using a scatterplot matrix, which is the default for R’s output if plot() is called on a dataframe. We can see that there are pretty strong positive correlations between all these variables, as all of them are related to the aircraft’s overall size. Remarkably there is an almost perfectly linear relationship between wingspan and tail height, which perhaps is related to some principle of aeronautical engineering of which I am unaware.

The exception here is the variable right in the middle which is the number of engines. There is one lone outlier [Boeing 747-400 (74S)] which has four, while all the other aircraft have two. In this way the engines variable is really more like a categorical variable, but we shall as the analysis progresses that this is not really important, as there are other variables which more strongly discern the aircraft from one another than this.

How do we easier visualize a high-dimensional data set like this one? By using a dimensionality reduction technique like principal components analysis.

Next let’s say I know nothing about dimensionality reduction techniques and just naively apply principle components to the data in R: 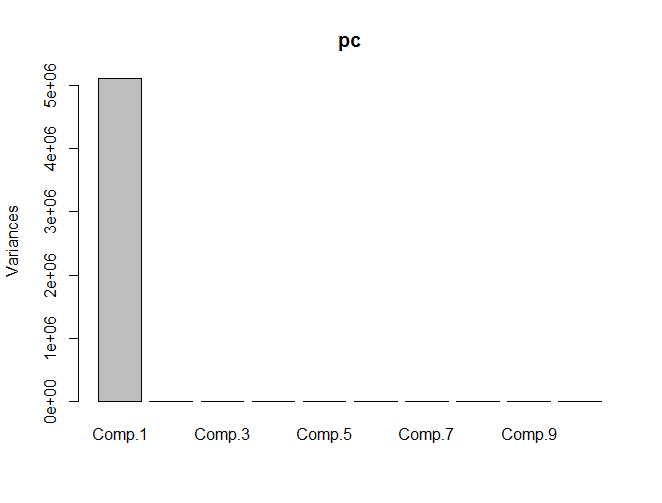 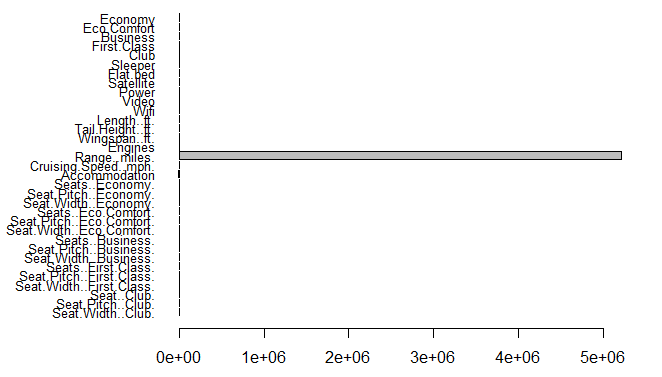 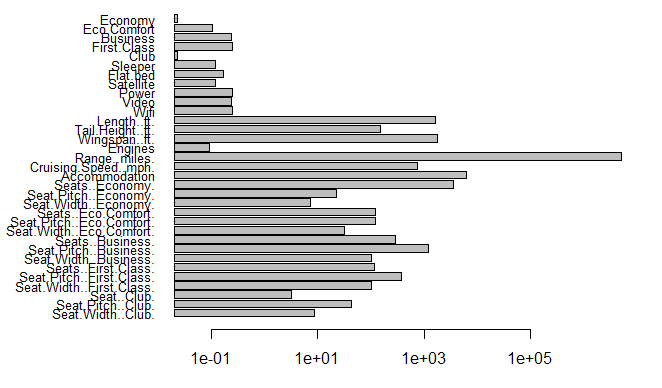 We correct for this by scaling the data using the scale() function. We can then verify that the variances across the different variables are equal so that when we apply principal components one variable does not dominate.

Now we can apply principal components to the scaled data. Note that this can also be done automatically in call to the prcomp() function by setting the parameter scale=TRUE. Now we see a result which is more along the lines of something we would expect: 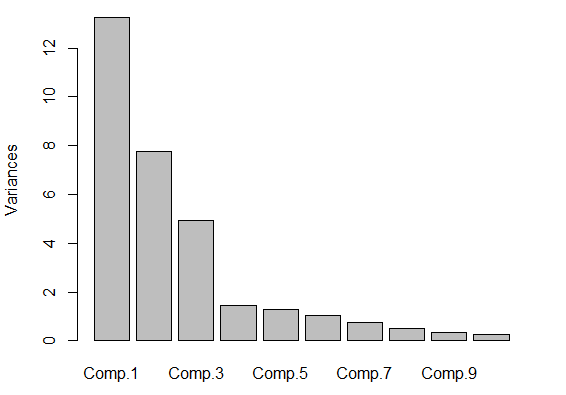 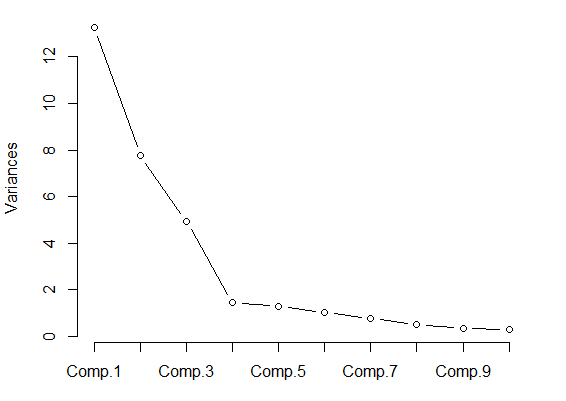 Great, so now we’re in business. There are various rules of thumb for selecting the number of principal components to retain in an analysis of this type, two of which I’ve read about are:

Here we are fortunate in that these two are the same, so we will retain the first four principal components. We put these into new data frame and plot. 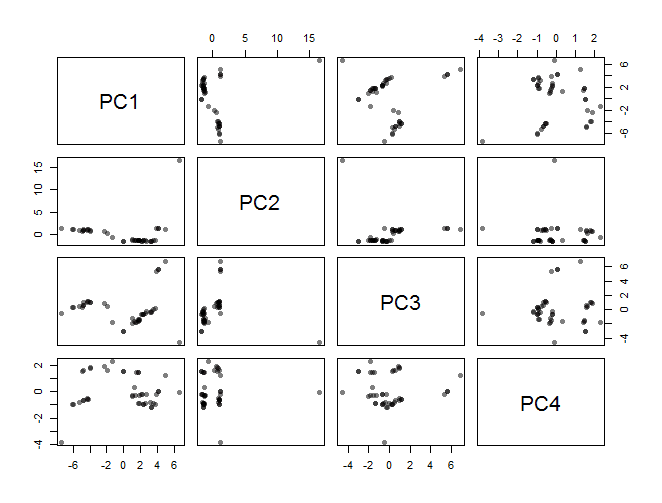 So what were are looking at here are twelve 2-D projections of data which are in a 4-D space. You can see there’s a clear outlier in all the dimensions, as well as some bunching together in the different projections.

Normally, I am a staunch opponent of 3D visualization, as I’ve spoken strongly about previously. The one exception to this rule is when the visualization is interactive, which allows the user to explore the space and not lose meaning due to three dimensions being collapsed into a 2D image. Plus, in this particular case, it’s a good excuse to use the very cool, very awesome rgl package.
Click on the images to view the interactive 3D versions (requires a modern browser). You can better see in the 3D projections that the data are confined mainly to the one plane one the left (components 1-3), with the exception of the outlier, and that there is also bunching in the other dimensions (components 1,3,4 on right). 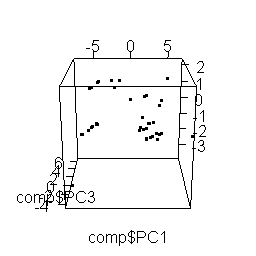 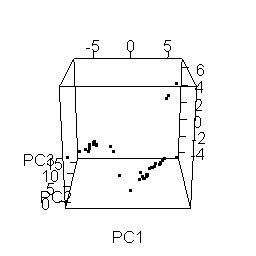 So, now that we’ve simplified the complex data set into a lower dimensional space we can visualize and work with, how do we find patterns in the data, in our case, the aircraft which are most similar? We can use a simple unsupervised machine learning technique like clustering.
Cluster Analysis
Here because I’m not a data scientist extraordinaire, I’ll stick to the simplest technique and do a simple k-means – this is pretty straightforward to do in R.
First how do we determine the number of clusters? The simplest method is to look at the within groups sum of squares and pick the ‘elbow’ in the plot, similar to as with the scree plot we did for the PCA previously. Here I used the code from R in Action:
However, it should be noted that it is very important to set the nstart parameter and iter.max parameter (I’ve found 25 and 1000, respectively to be okay values to use), which the example in Quick-R fails to do, otherwise you can get very different results each time you run the algorithm, as below.
So here we can see that the “elbow” in the scree plot is at k=4, so we apply the k-means clustering function with k = 4 and plot. 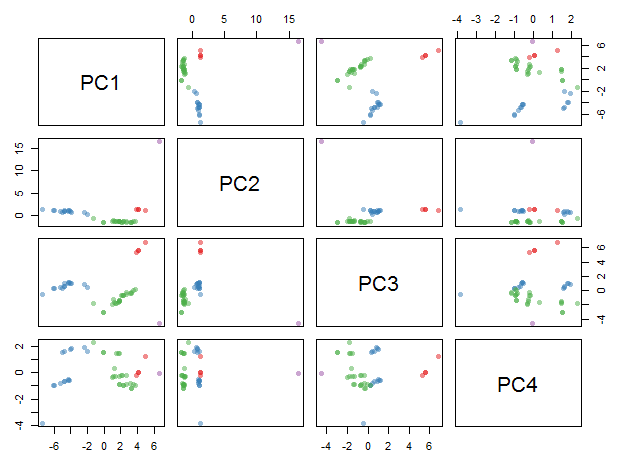 We can see that the one outlier is in its own cluster, there’s 3 or 4 in the other and the remainder are split into two clusters of greater size. We visualize in 3D below, as before (click for interactive versions): 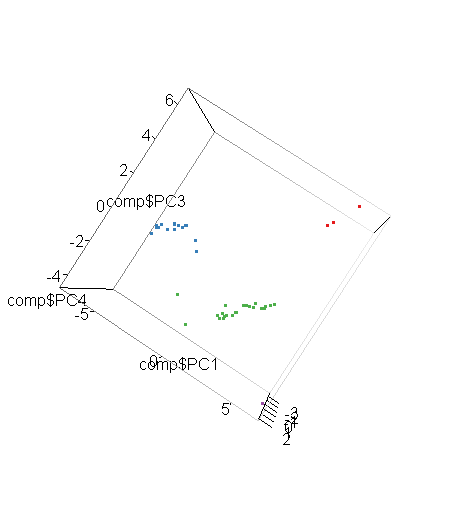 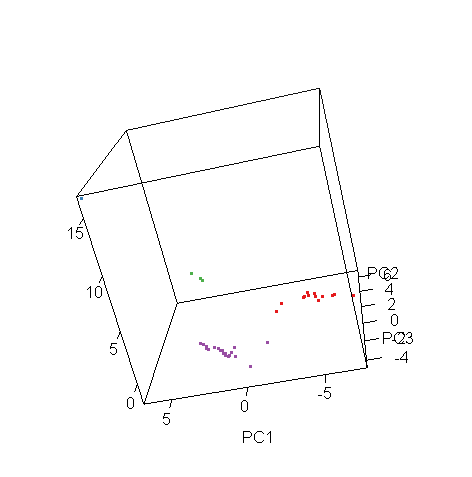 We look at the exact clusters below, in order of increasing size:
[1] “Airbus A319 VIP”

The first cluster contains a single aircraft, the Airbus A319 VIP. This plane is on its own and rightly so – it is not part of Delta’s regular fleet but one of Airbus’ corporate jets. This is a plane for people with money, for private charter. It includes “club seats” around tables for working (or not). Below is a picture of the inside of the A319 VIP: Ahhh, that’s the way fly (some day, some day…). This is apparently the plane professional sports teams and the American military often charter to fly – this article in the Sydney Morning Herald has more details.

The second cluster contains four aircraft – the two CRJ 100/200’s and the Embraer E120 and ERJ-145. These are the smallest passenger aircraft, with the smallest accommodations – 28 for the E120 and 50 for the remaining craft. As such, there is only economy seating in these planes which is what distinguishes them from the remainder of the fleet. The E120 also has the distinction of being the only plane in the fleet with turboprops. Photos below.

I’ve flown many times in the venerable CRJ 100/200 series planes, in which I can assure you there is only economy seating, and which I like to affectionately refer to as “little metal tubes of suffering.”

The other two clusters comprise the remainder of the fleet, the planes with which most commercial air travellers are familiar – your Boeing 7-whatever-7’s and other Airbus and McDonnell-Douglas planes.

These are split into two clusters, which seem to again divide the planes approximately by size (both physical and accommodation), though there is crossover in the Boeing craft. 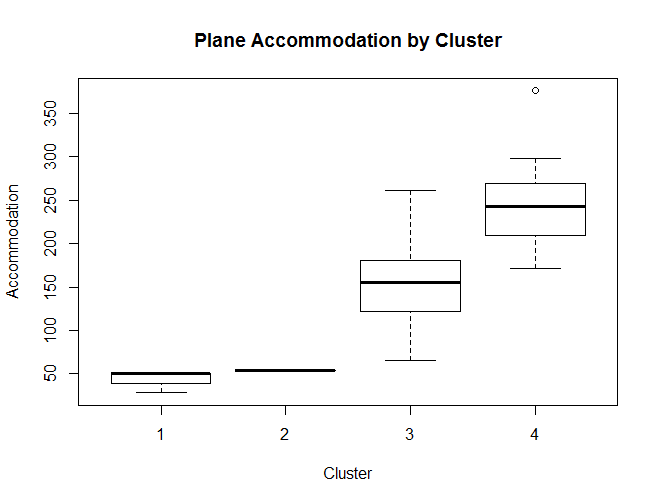 Looking at the raw data, the difference I can ascertain between the largest two clusters is that all the aircraft in the one have first class seating, whereas all the planes in the other have business class instead [the one exception being the Boeing 767-300 (76U)].

This was a little analysis which for me not only allowed me to explore my interest in commercial aircraft, but was also educational about finer points of what to look out for when using more advanced data science techniques like principal components, clustering and advanced visualization.
All in all, the techniques did a pretty admirable job in separating out the different type of aircraft into distinct categories. However I believe the way I structured the data may have biased it towards categorizing the aircraft by seating class, as that quality was replicated in the data set compared to other variables, being represented both in quantitative variables (seat pitch & width, number of seat in class) and categorical (class presence). So really the different seating classes where represented in triplicate within the data set compared to other variables, which is why the methods separated the aircraft in this way.

If I did this again, I would structure the data differently and see what relationships such analysis could draw out using only select parts of the data (e.g. aircraft measurements only). The interesting lesson here is that it when using techniques like dimensionality reduction and clustering it is not only important to be mindful of applying them correctly, but also what variables are in your data set and how they are represented.

For now I’ll just keep on flying, collecting the miles, and counting down the days until I finally get that seat in first class. 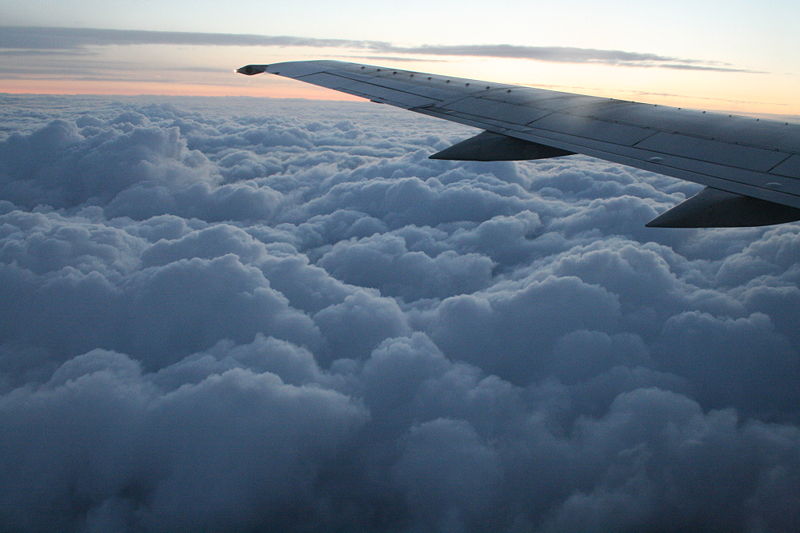